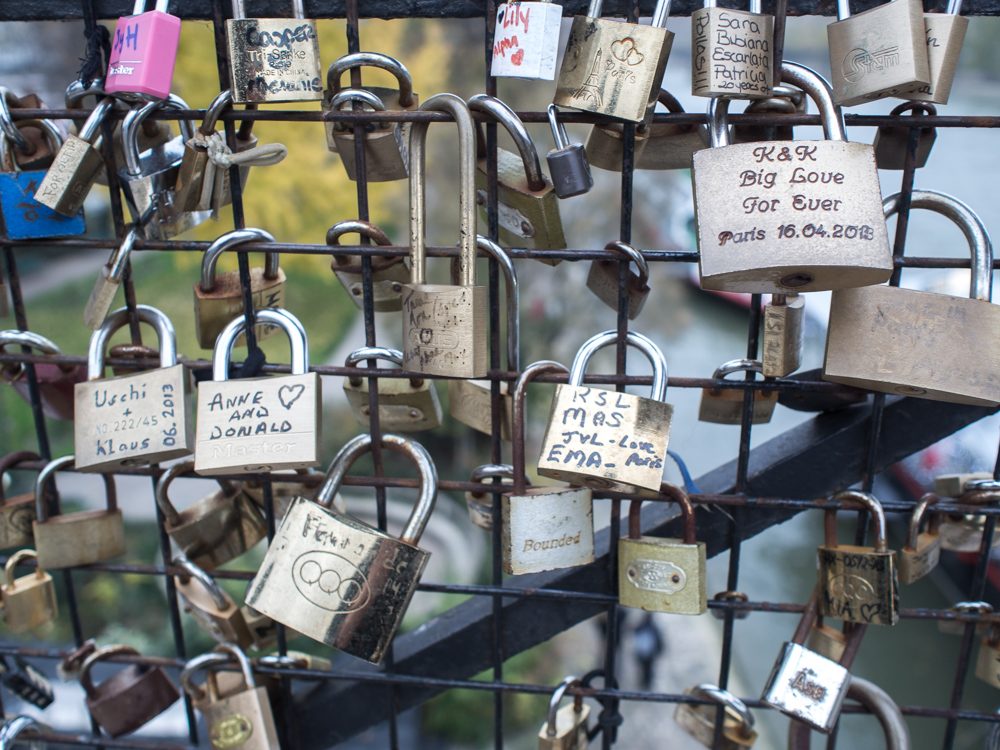 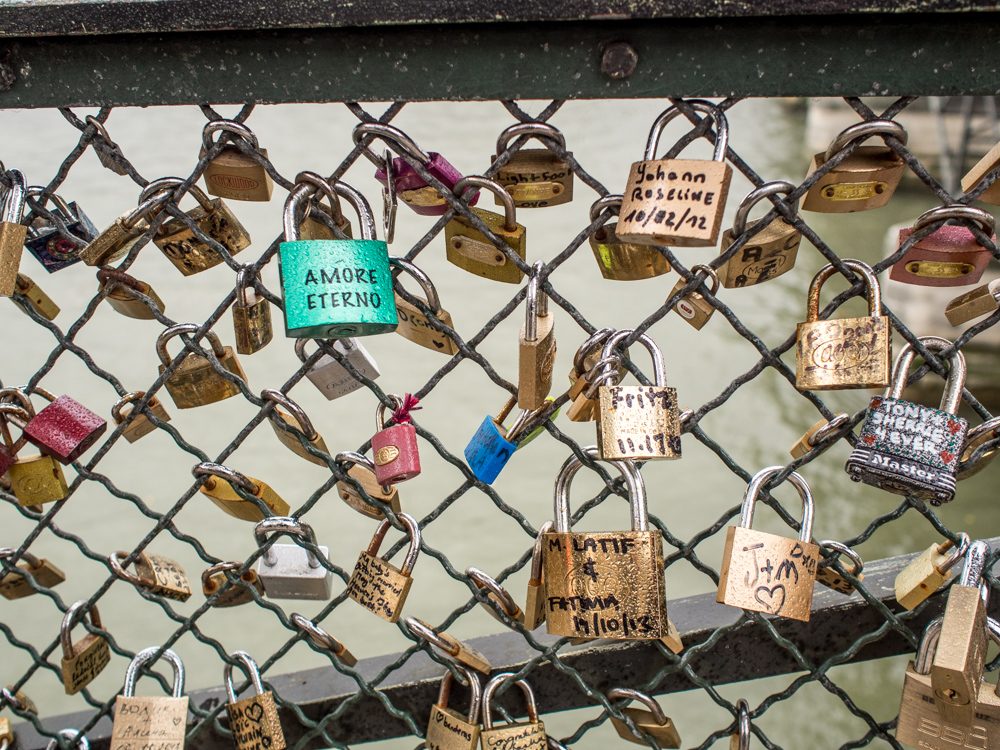 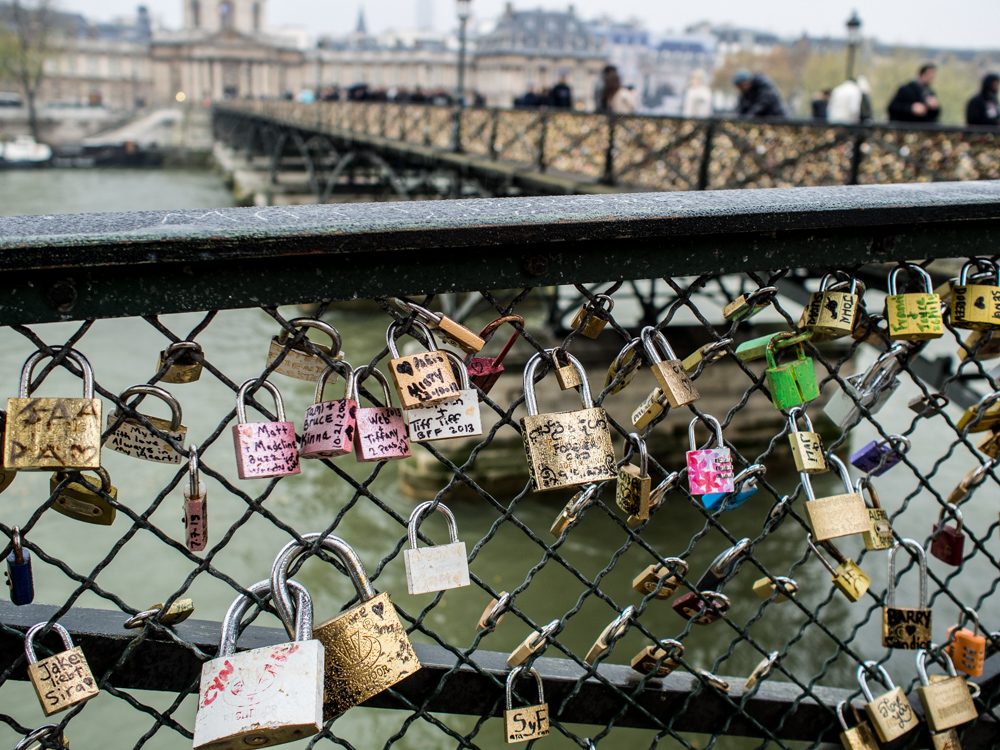 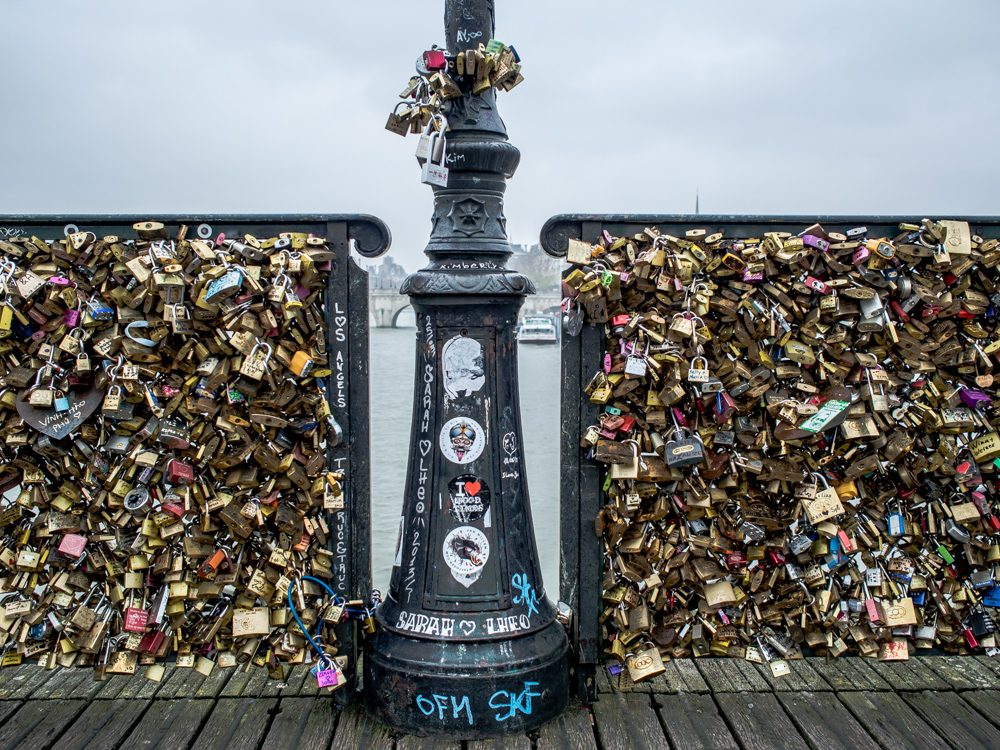 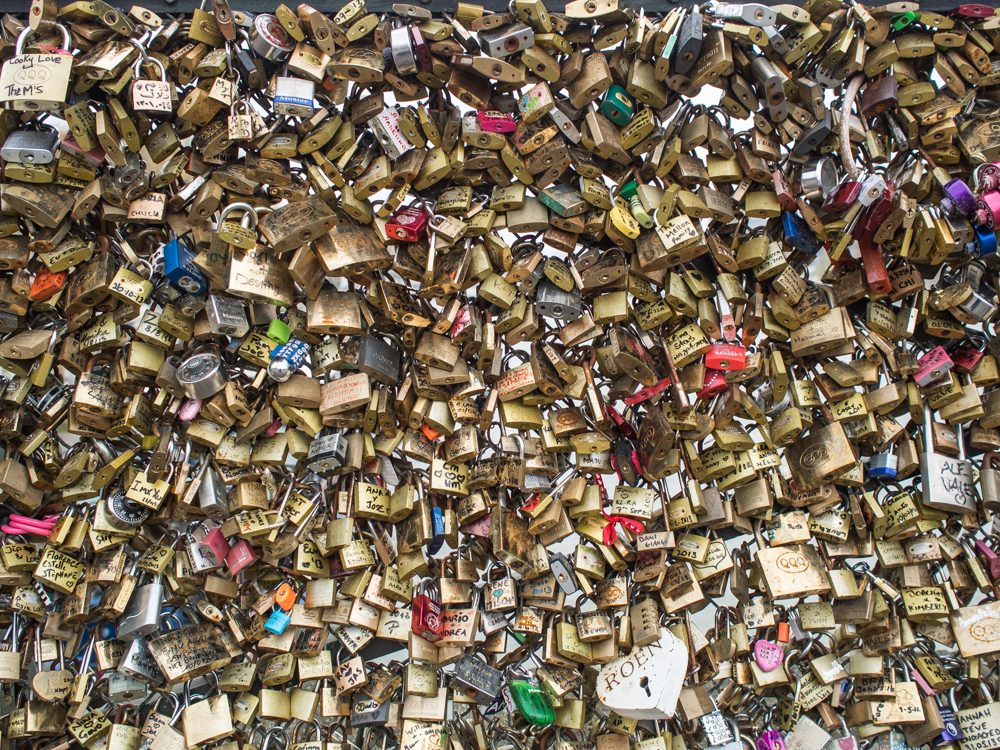 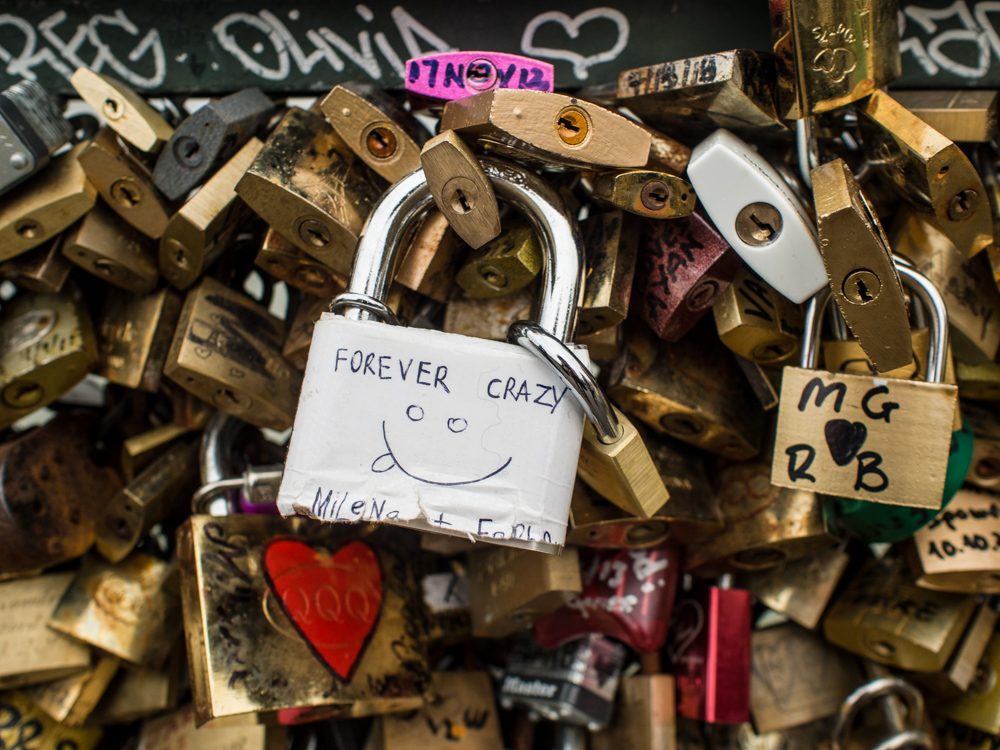 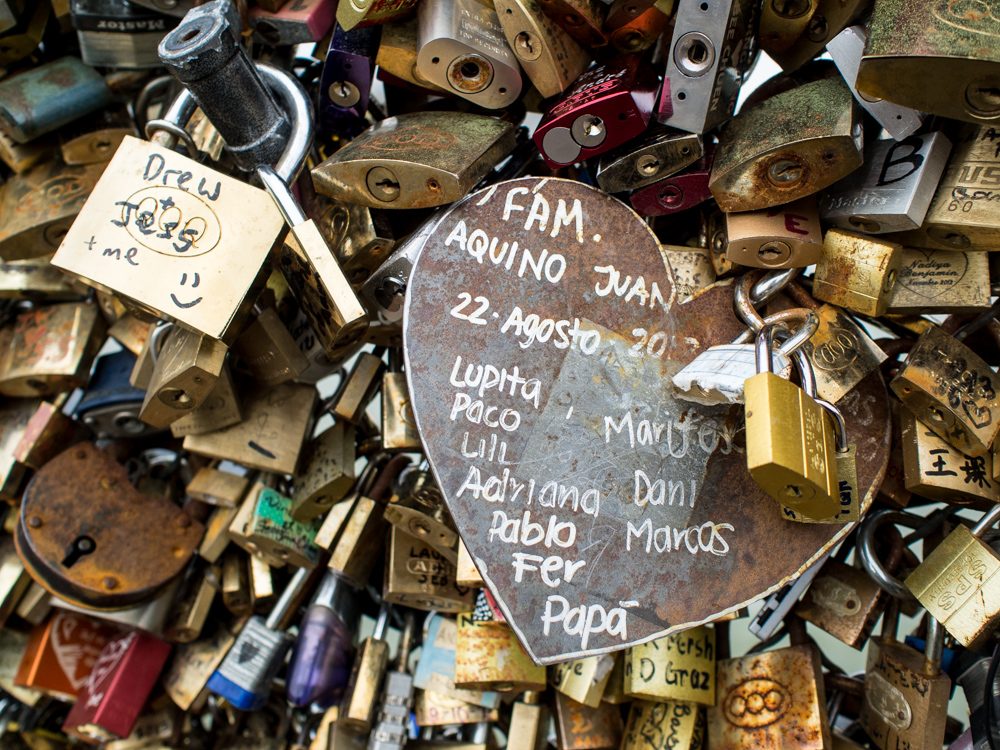 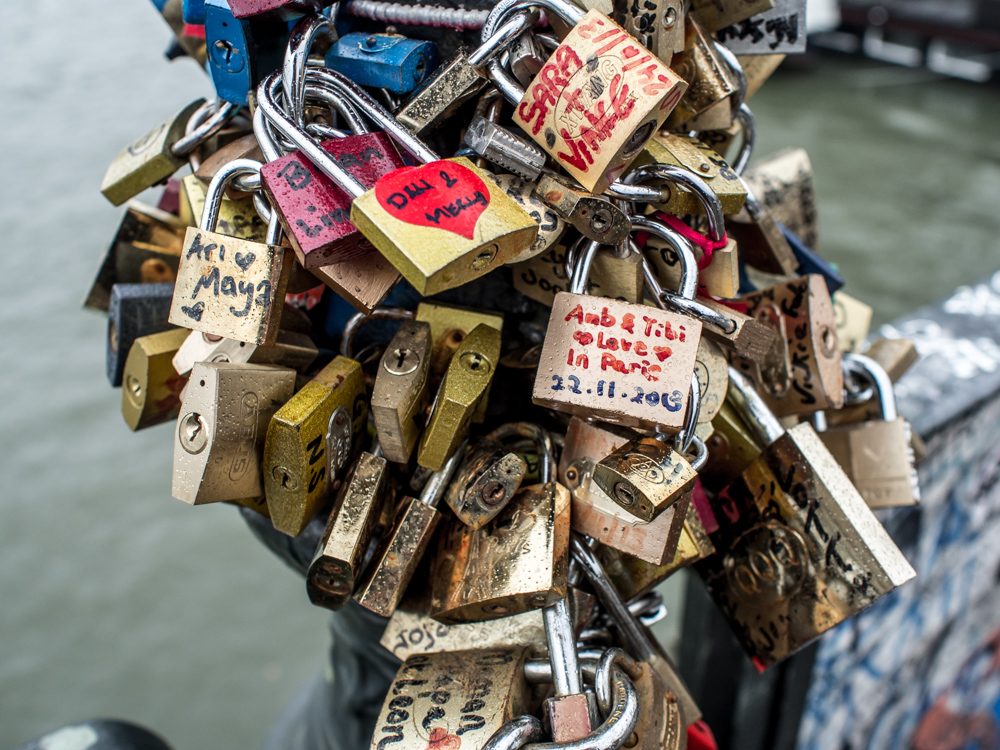 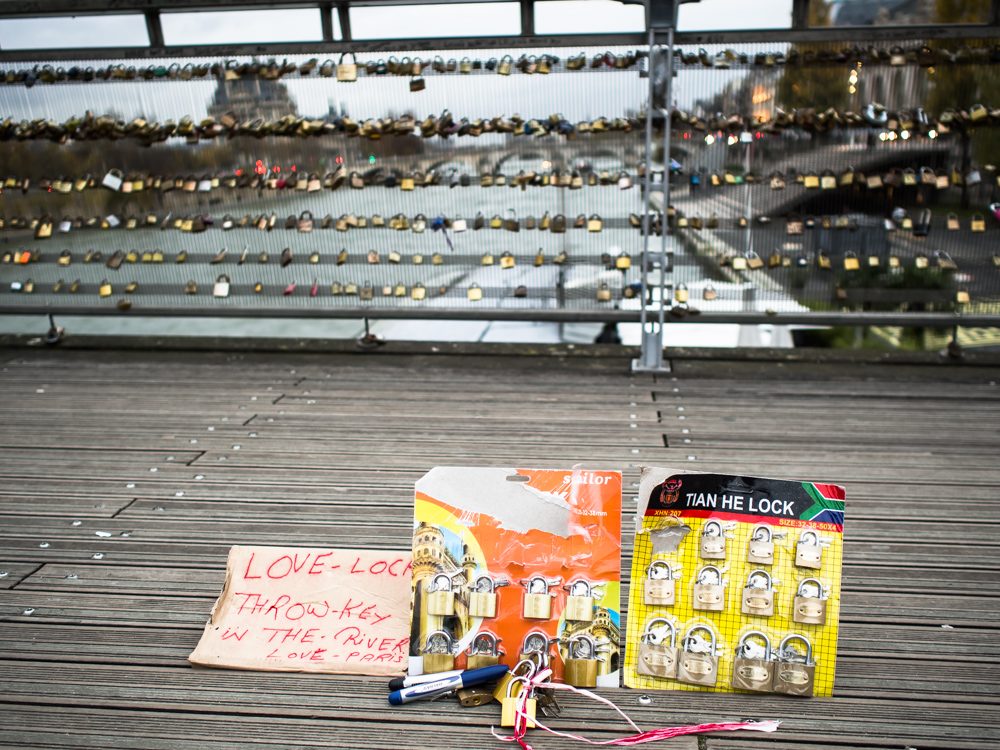 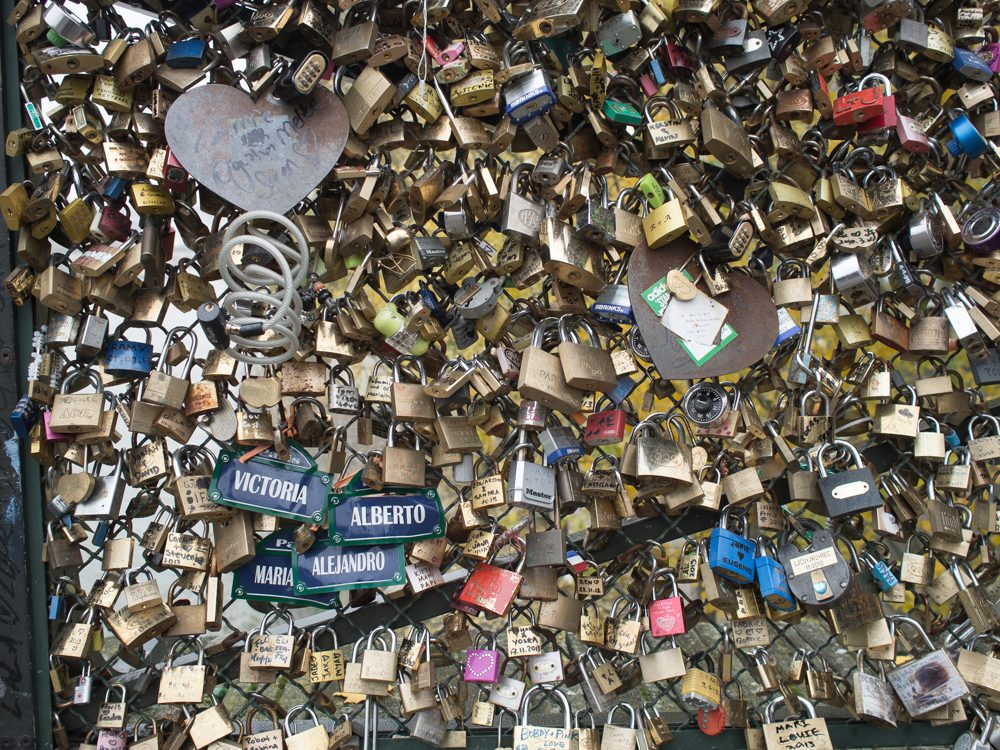 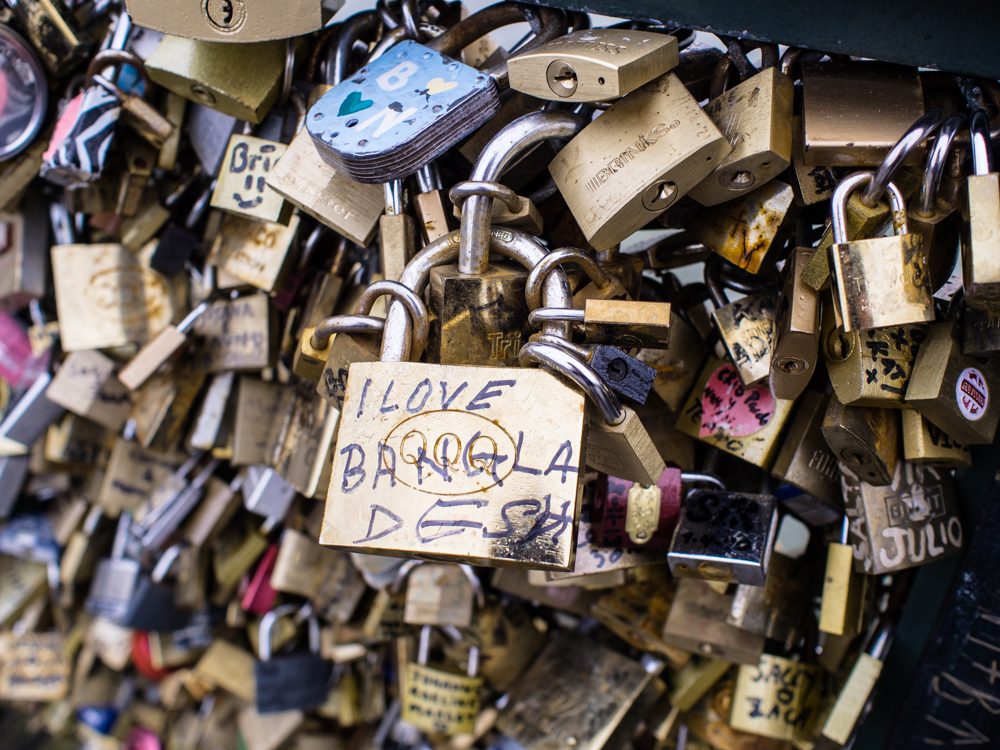 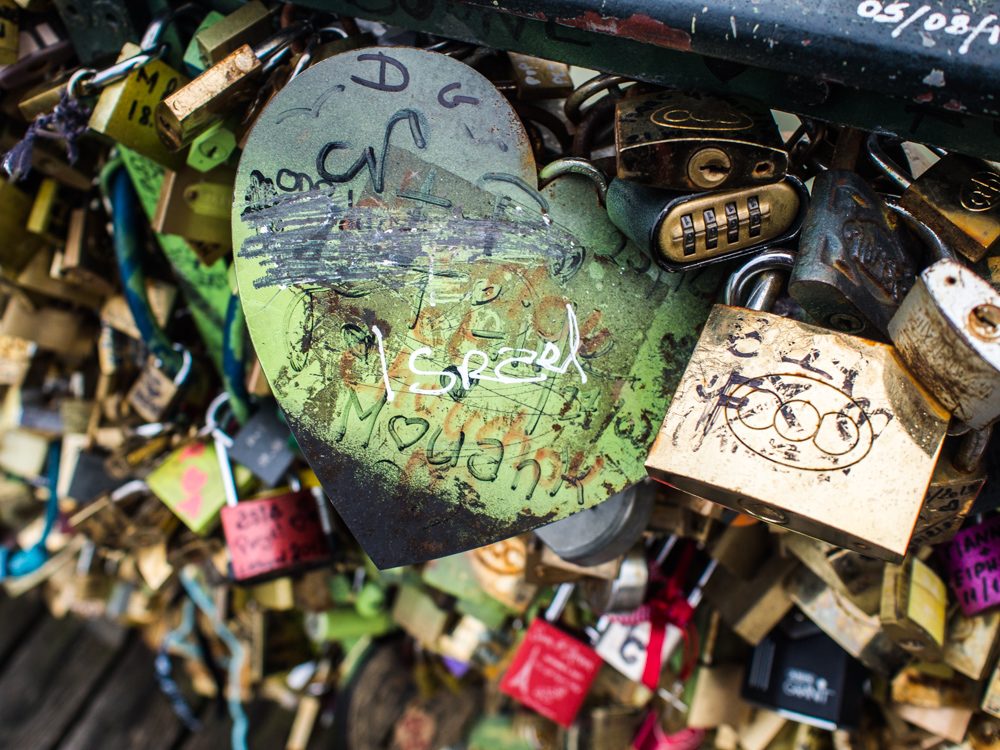 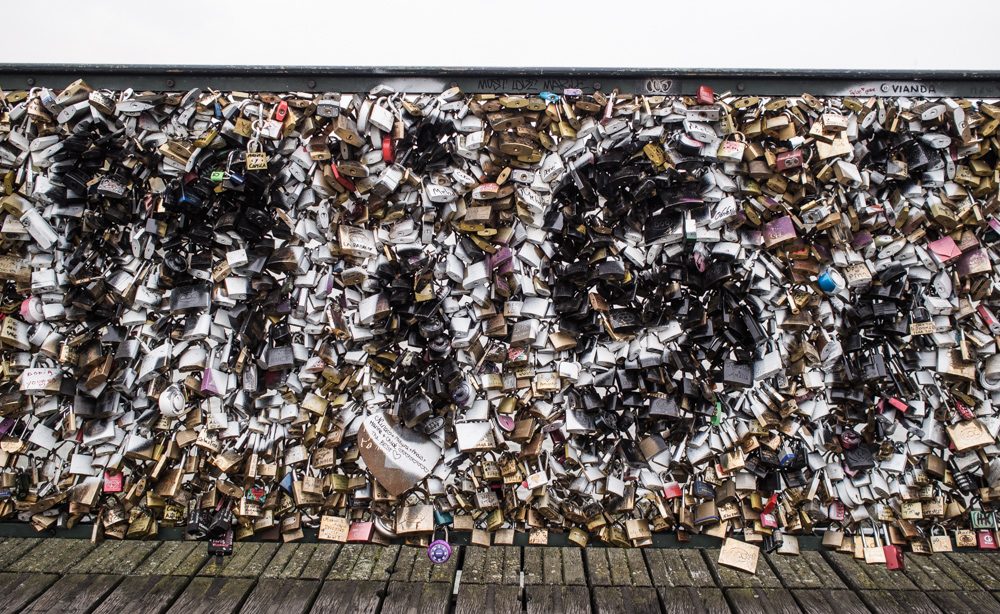 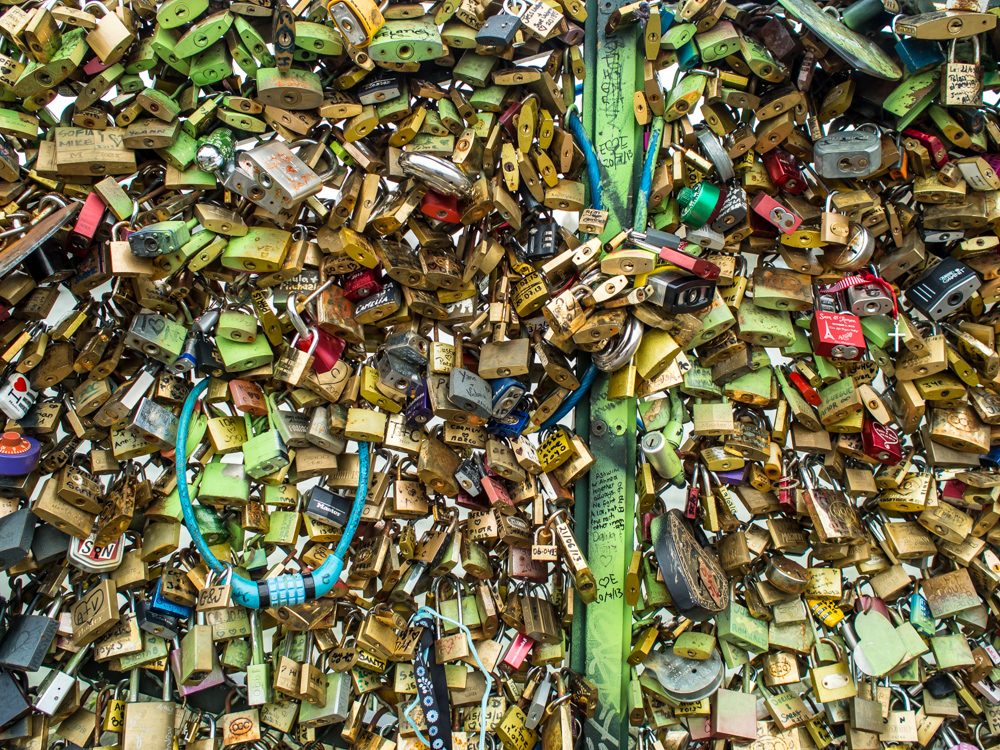 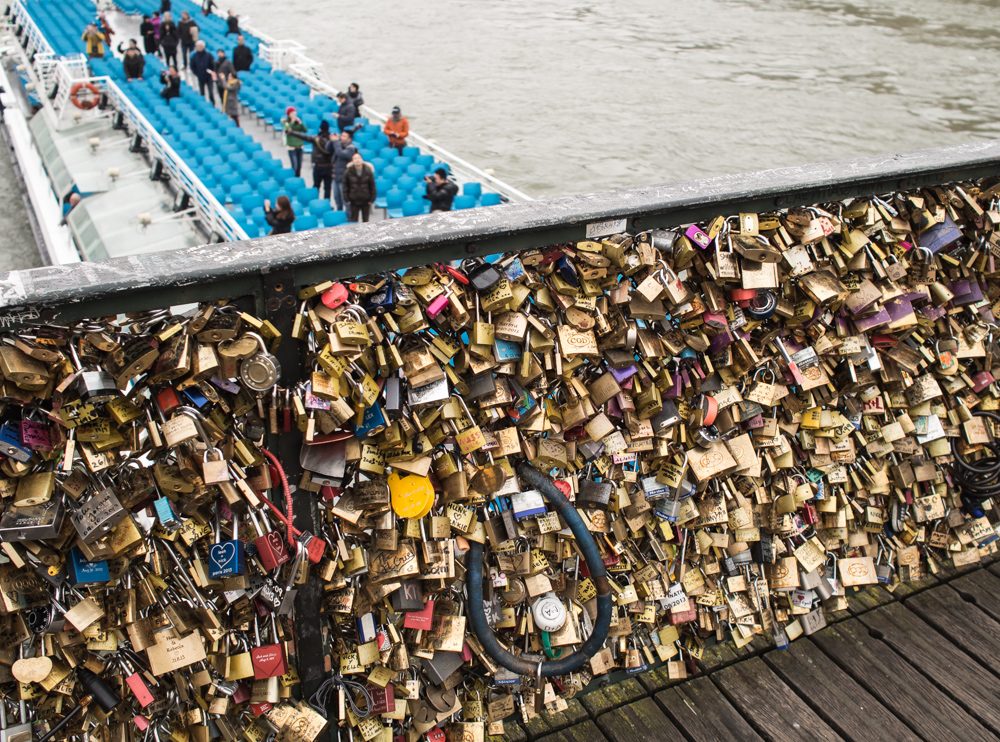 Part of the Paris tourist experience 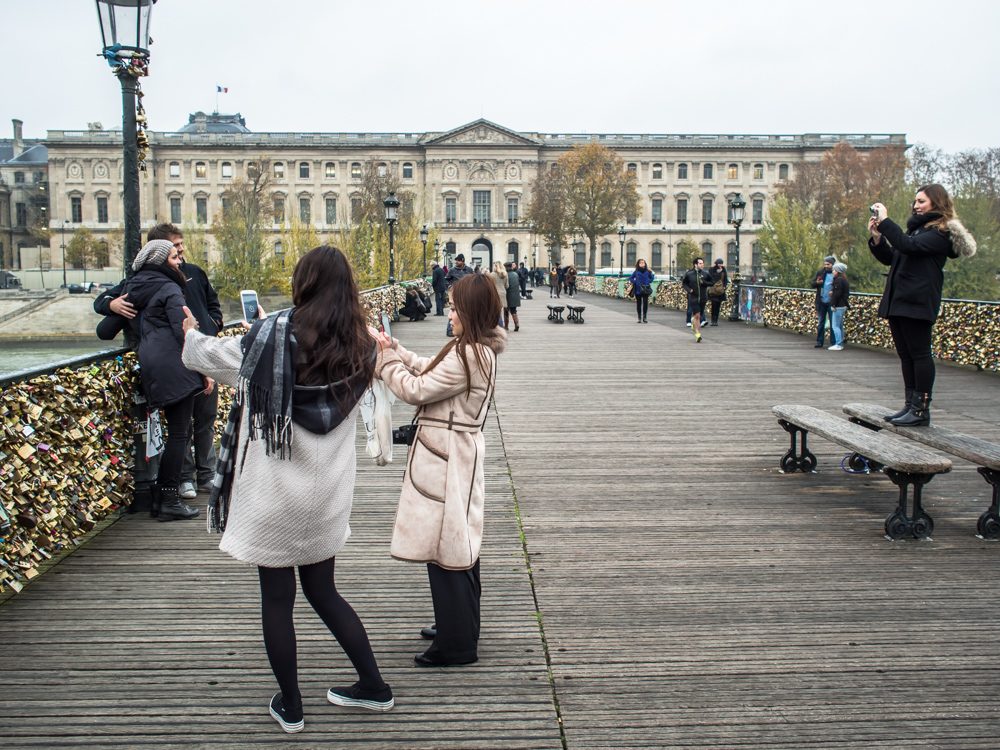 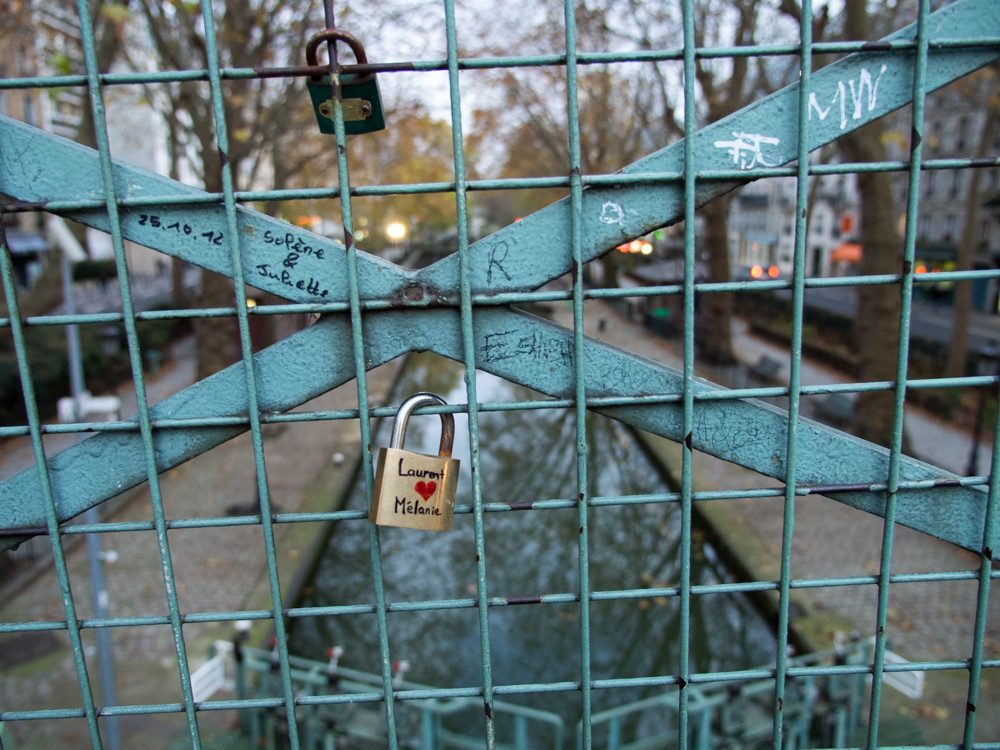 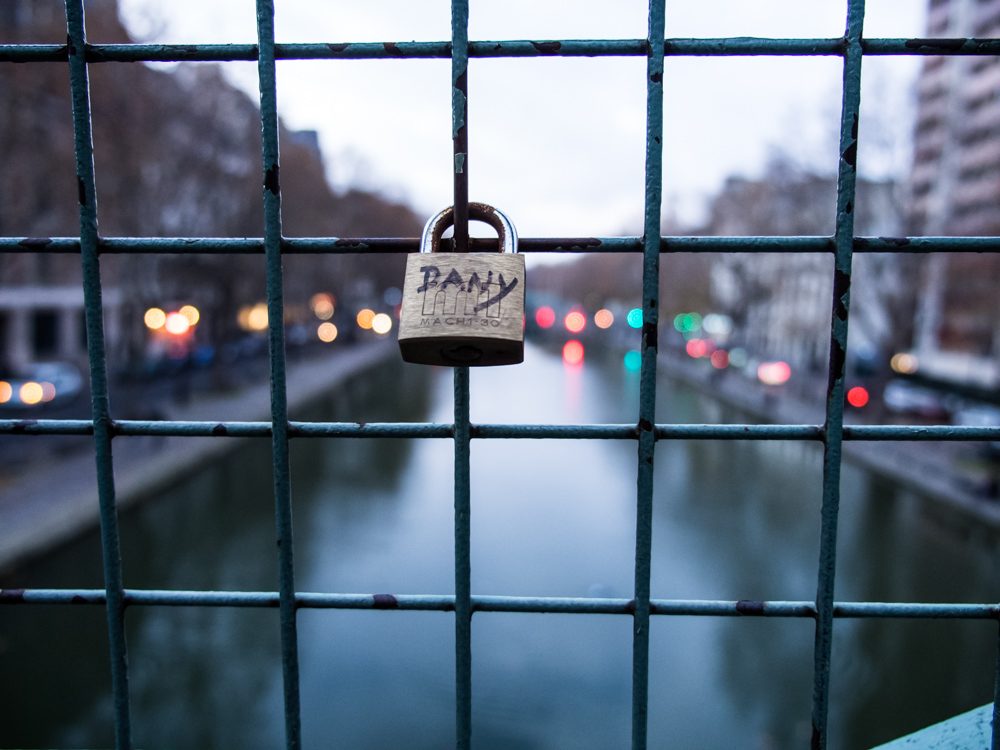 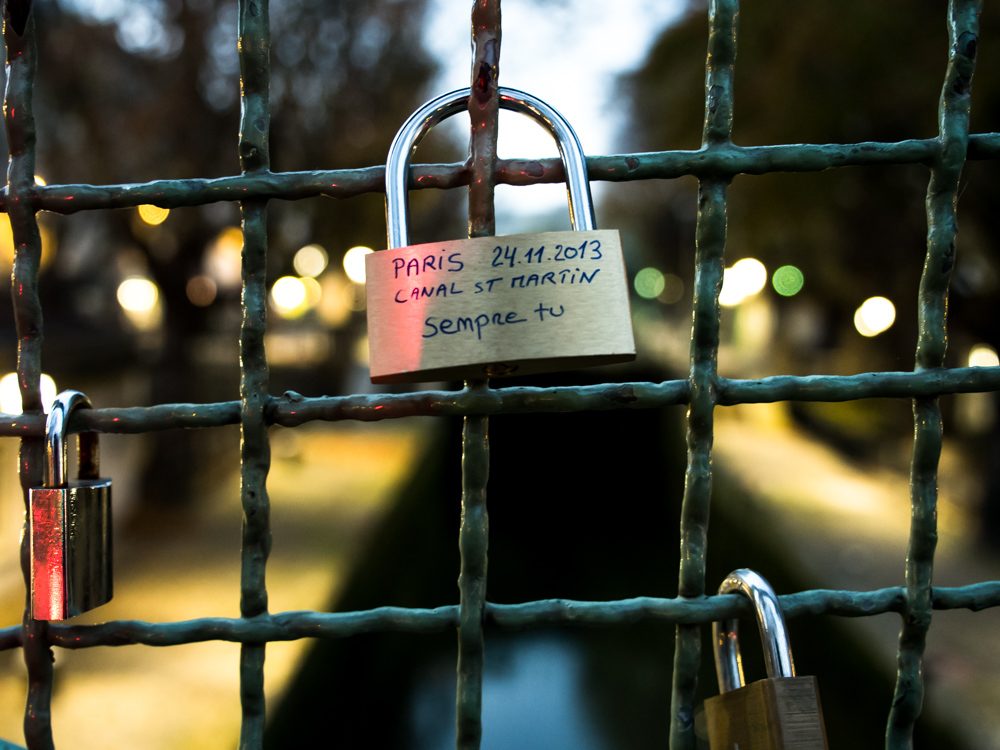 I first came across lovelocks on Pont des Artes in Paris in November 2011 and I’ve read countless blogs about the appearance and re-appearance of these lovelocks on paris bridges.

During my most recent trip to Paris in late November 2013 the lovelocks of Pont des Artes have transformed to form a wall of multi-coloured locks on the surface of the bridge – a pattern of little shapes declaring undying love and togetherness. As the real estate of the main bridge becomes oversubscribed the locks have found their way to the bridge approaches – and other bridges in Paris that provide a way to attach a lock.

As we look at the walls of locks the individual declarations of love and togetherness are lost in the crowd – its seems that with some the writing has worn off, or in some instances the declaration of love is for country or some other purpose.

The ever inventive tourist touts of Paris have found a new market of goods beyond the eiffel towers and I love Paris t-shirts. If you haven’t brought your own lock they will sell you one – and a marker pen to write your message… I wonder if the lock-makers are experiencing a shortage of supply?

The range of padlocks, bicycle locks and combination locks create a lovely pattern, encouraging a further layer of paint, graffiti and other artistic additions. Clearly some lovers come prepared with carefully engraved locks with strong colours to stand out from the crowd – or you could perhaps design a specific banner – like the fake paris street signs with lovers names inscribed. But of course you could always buy a lock if you need to…

When I lived in Paris in the late 1990s I remember the Pont des Artes as a public space for meeting up, having a picnic or just getting together. On a cold winter day in November it was full of tourists making photos against the walls of locks, attaching locks or making selfies of their locks before attaching them – somewhere – on the bridge.